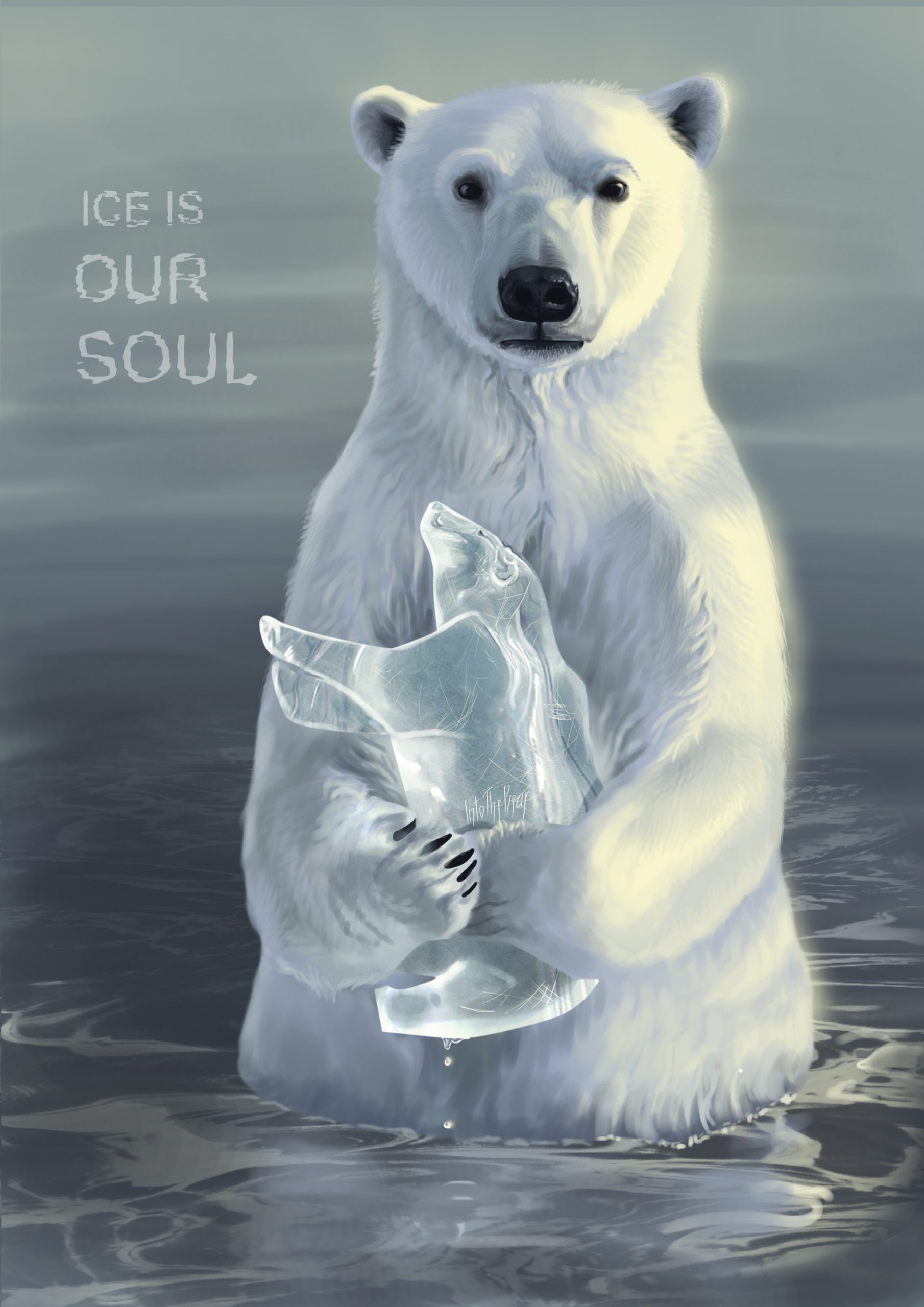 Polar bears are the largest carnivorous land mammals on Earth. They are about seven to eight feet long, measured from the nose to the tip of their very short tail. Male polar bears are much larger than females. A large male can weigh more than 1,700 pounds, while a large female is about half that size (up to 1,000 pounds). Bears can weigh about 50 percent more after a successful hunting season than they do at the start of the next; most of this additional weight is accumulated fat. A newborn polar bear weighs only about 1.5 pounds.

Many of the polar bear’s physical adaptations help it maintain body heat and deal with its icy habitat. The bear’s outer layer of fur is hollow and reflects light, giving the fur a white color that helps the bear remain camouflaged. The skin under the polar bear’s fur is black; this black is evident only on the nose. Polar bears also have a thick layer of fat below the surface of the skin, which acts as insulation on the body to trap heat. This is especially important while swimming and during the frigid Arctic winter. The bear’s large size reduces the amount of surface area that’s exposed to the cold per unit of body mass (pounds of flesh), which generates heat.

The polar bear’s footpads have a kind of “non-slip” surface, allowing them to get traction on slippery ice. Polar bears have strong legs and large, flattened feet with some webbing between their toes, which helps with swimming and walking on ice. The wide paws prevent sea ice from breaking by distributing the polar bear’s weight as it walks. The webbed feet result in making polar bears, unlike other bear species, considered to be “marine mammals” along with seals, sea lions, walruses, whales, and dolphins. However, they are still bears. The polar bear evolved one to three million years ago from the brown bear, which still ekes out a marginal life along the northern shore of the Arctic oceans. Unlike the massive polar bear, which can grow huge on a diet of abundant seals, its ancestor in the Arctic is small, has very lower reproductive rates, and eagerly eats almost anything that exists in its environment.

Polar bears have evolved something else that is different from their ancestor: most polar bears don’t den, however, all brown bears do. When grizzly bear food is covered in snow during the winter, this species must den because there is nothing to eat. In contrast, most polar bears have access to their food of choice (seals) all winter long, so there is no need for them to den. The exception to this is pregnant adult females. Pregnant female polar bears must den so that their tiny newborn cubs are born in a warm protected environment; dens can be 38 degrees Fahrenheit warmer than the outside temperature. The cubs would otherwise freeze to death in the frigid temperatures of the far north.

Polar bears depend on the sea ice, which forms above the open waters where their seal prey lives. They will spend time on land when sea ice is not available (and most pregnant polar bear females make their dens on the shore near the coast). Polar bears are excellent swimmers, and they travel long distances between shore and the sea ice if necessary. However, if a storm kicks up during these increasingly long swims (caused by the warming ocean), they can drown. These long swims and storms are also often difficult for cubs. During periods of ice breakup, polar bears frequently swim between floating ice islands.

Permanent, multi-year ice that doesn’t ever melt is more important to polar bears than the annual ice that melts and reforms every year; this multi-year ice is increasingly rare, but will likely persist for longer in the island archipelago of northwestern Canada than in Alaska or off the northern coast of Russia.

Unlike other bear species, polar bears are almost exclusively meat eaters (carnivorous). They mainly eat ringed seals, but may also eat bearded seals. Polar bears hunt seals by waiting for them to come to the surface of sea ice to breathe. When the seal nears the surface, the polar bear will bite or grab the seal and pull it onto land to feed. They also eat walruses and whale carcasses. Polar bears will search out bird eggs and other food sources, but none of these are abundant enough to sustain the large body mass and dense populations of polar bears.

Another vitally important food source in most areas is seal pups that are born and live in dens on the Arctic ice. The polar bear identifies these dens by smell and other markers and pounces through the roof of the den to capture the young seals. In Hudson Bay, the availability of seal pups in the spring is increasingly limited by the earlier melting of ice. In the Arctic, polar bears are at the top of the food chain; they eat everything and nothing (except native hunters) eats them.

Polar bears tend to live solitary lives except when mating when a female raising her cubs forms a family group, or when many bears are attracted to a food source like a beached whale. Young polar bears spending the summer ashore on the Hudson Bay coast will frequently play with each other, most commonly with their siblings. Polar bears near Churchill on the coast of Hudson Bay are even known to play with chained sled dogs without killing them, which they could easily do.

Polar bears breed in the late spring as the temperatures begin to rise in the Arctic. Like other bear species, however, they don’t become pregnant at the time of breeding as the tiny embryo (or blastocyst) will not implant in the female’s uterus until fall, when true gestation starts. This is called delayed implantation and allows a female bear to physiologically assess her condition before starting gestation and the process of birthing, nursing, and carrying her offspring for the next three years. The period of actual gestation following implantation is only about 60 days.

In the Hudson Bay population, where the reproductive biology of polar bears has been most extensively studied, it appears that a polar bear female carrying a blastocyst must achieve a body weight of at least 490 pounds to have the blastocyst implant and start gestation. If this threshold is not achieved, the blastocyst will reabsorb, and the female will continue to hunt seals all winter, attempting to be fatter a year later and able to carry off a successful pregnancy.

At the beginning of the winter, a pregnant female will dig a den in a snow bank and begin the process of gestation. Depending on the area, pregnant females may enter dens anytime between early October and December. The time of exit from dens occurs between late February and April. Most females dig their dens in a snow bank on land, but some also den on the floating sea ice. In Hudson Bay, females may dig a den in the ground instead, but they use areas where the snow will build up and provide insulation. In the middle of winter in some of the coldest places on Earth, female polar bears give birth to cubs. Litter size is most commonly two cubs, but sometimes litters can be one, three, or, very rarely, four cubs.

Female polar bears in the Hudson Bay area spend remarkable periods fasting, the longest known of any mammal species. This fasting period before denning and in dens averages about 180 to 186 days. In Hudson Bay, pregnant females can successfully fast for as long as 240 days. The long period of fasting makes this species especially vulnerable to environmental changes like a warming climate, which reduces the amount of time they have available to build up the fat reserves they need to survive fasting and bring off a successful pregnancy.

When the cubs are born, they are completely dependent on their mother. They stay in the den nursing on her rich milk until spring, when they emerge and start exploring the world as their mother heads out to the ice to catch the seals she needs to replenish the weight she’s lost during her period of fasting. Over the next two years, the cubs will learn from their mother how to catch seals themselves and develop the other skills needed to survive and grow to adult size. Typically cubs will stay with their mother until they are two-and-a-half years old, but in some cases, they will stay for a year more or a year less. If the mother can replenish her fat reserves sufficiently, she can produce a litter of cubs that survive until weaning every three years. When food declines in abundance, there is a longer period between successive successful litters, and litter sizes are smaller. Polar bears in the wild can live to be 30 years of age, but this is rare. Most adults die before they reach 25 years.

The conditions developing in Hudson Bay are such that females will no longer be able to birth and successfully raise little cubs. When this happens, the adult bears will survive until they die of old age and the population will be doomed. Scientists are fearful that this pattern is also starting to happen in the more northern polar bear populations as the amount of Arctic ice continues to shrink.