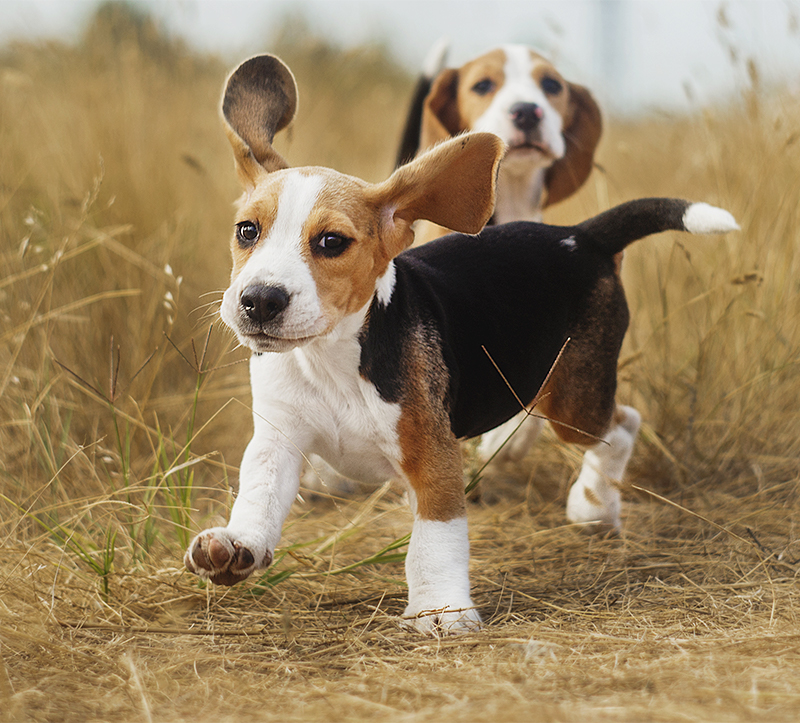 Have you ever wondered how your dog feels about you? While they can’t exactly tell you they love you, they most assuredly do, showing it through various behaviors, some of which are obvious and some of which are surprising.
Which of these signs of love and affection does your dog display?

Your dog yawns right after you do

Have you ever woken up in the morning and yawned only to have your dog yawn, too? Recent research has shown that this is how dogs do show empathy and an emotional connection to their owners.
Dogs have been man’s best friend for at least 14,000 years. Behaviors like contagious yawning appear to evolve from the necessity of coordinating activities and furthering our species-to-species bond.

Your dog stares at you — a lot

A dog that looks you in the eye is most likely showing your love. Just as we do, dogs look us in the eye to express their affection toward us. This mutual staring contest releases oxytocin or the “love” hormone in your pup.
We feel it, too. Just like when a new mom looks at her baby, we release oxytocin when we look at our forever family members.

Your dog has a ‘helicopter tail’

Have you ever seen your dog wag his tail like a propeller? When they do this, it’s because they’re so very happy to see you. If you add factors such as treats, toys, and a little of his favorite banter, they’re bound to do it even more. Just think of the “helicopter tail” as the equivalent of a human smile.

Your dog leans against you

When a dog leans on you with all their weight, it should be pretty obvious they need to be close to you. Sometimes, it’s because they’re afraid of something, like a thunderstorm or fireworks and they need the protection of the alpha in their pack. Other times, they may just need affection and attention.
While some claim these are dominance behaviors, it really varies from dog to dog — only you know if your pup is being snuggly or acting out in another way.

Your dog brings you a toy he can’t live without

As you are the leader of the pack, your dog may bring you a toy to please you and ensure they’re safe within that pack. They also may be simply trying to get you to play with them. Whatever the reason, giving you their toy is an affectionate act for someone that they hold in the highest regard.

Your dog gives you a toothy grin

A dog’s happy, open-mouthed smile, which can last for some time can be a sign of great affection toward its owner, but the reasons for this are multi-layered. When dogs see us smile, they often smile back because they are relaxed, happy, and hoping to appease the leader of their pack.
Some researchers say our dogs are actually mimicking us when this happens, as it does not happen toward other dogs or animal species. They also flash their pearly whites to get humans to react positively by laughing, giving them treats, or showing them general affection.

Your pup is a snuggle bug

Dogs cuddle for a variety of reasons. They do it to stay warm, to bond with you, and because it releases oxytocin, which comforts and calms them.
Studies show that three minutes is all it takes to for the love hormone to surge in humans and dogs. Imagine what a few hours on the couch can do.

Your dog sleeps near you

A dog that sleeps near you considers you a member of the pack and does so with its loyalty, trust, and protective instinct.
Even if they don’t sleep directly on your bed, they may take up their nightly position on the floor next to you.

Your dog checks on you frequently

If you can’t even take a bath without the dog staring at you while you do it or if your pup is underfoot while you go about your business in the house, it’s a sign of a strong bond between you.
This sometimes comes with months or years of reinforcement, but when they know where their happiness emanates from, they will continue to want to be around its source.

Your dog rubs their face on you

Dogs rub against things to mark their territory, and you are your dog’s territory. A dog’s scent glands are in its face, so when your pup does this, they are basically marking you with their scent, which lets other dogs know to stay away.
It’s also the way they say, “Hey, don’t forget about me! I’m right here!”

Your dog licks you all the time

Licking is an instinctive behavior in dogs, but when your dog licks you, it could be because you taste good or because they are showing you love. This food-seeking behavior is also a ritualized greeting. Wild dogs are known to lick pack members to welcome them back to the pack.

Your pup gives you their paw

Dogs mimic our behaviors in many ways, and if your dog gives you their paw, that’s their way of reciprocating their love since they can’t say, “I love you.” After all, you show them affection by petting them, and they are essentially returning the favor.

Dogs can feel when you need emotional support

There aren’t as many emotional support animals as there are dogs and with good reason. Dogs, more than any other species, know when a human, particularly their human, is hurting. Research shows that when you cry, your dog also feels distressed and will do what it can to try and help you feel better.

Your dog sleeps facing away from you

While it may just be a comfortable position for your dog to sleep facing away from you, it is also said to be a sign of trust. They trust their surroundings and, by extension, you. They are just that relaxed in your presence and are also guarding you, even during their slumber. By sleeping this way, they can better face any incoming threat.

Your dog knows your name

There is scientific evidence that your dog not only knows your scent and knows what you look like, but they also may know your name if they hear it enough. And they will even show excitement when they do hear it, even when you’re not present.

Your dog gets jealous

While this isn’t the best trait for a dog to have, often if a dog’s owner shows they are distracted by another person or thing, their fur friend will act out. While plenty of pet parents have witnessed this behavior firsthand, science has also confirmed it.

Your dog knows when you’re coming home before you do

You and your pup have such an incredible bond that they know when your workday is over before you even walk in the door. Because both species have been living side by side for thousands of years, your dog has learned to pick up on daily cues, like your car pulling in the driveway. Your dog may also be able to tell when you’ll come home by your scent. As it fades over the course of the day, they know it’s time for you to return.

Your best fur friend cries when they see you

If your dog cries when you come home, it may not seem perfectly normal, but your pup is just expressing how excited they are to see you, particularly as you are the pack leader. They also know that you will return the love they’re so clearly exhibiting. Think of these as happy tears.